So you’re on vacation in San Diego and chose to stay at the wonderful Blue Sea Beach Hotel in our favorite beach town, Pacific Beach. And you’ve even booked some surf lessons with Pacific Surf. You should give yourself a pat on the back because you’ve made a great decision. Maybe you came for the white sandy beach and the warm waters, or maybe you came for the endless summer beach party scene. Maybe you even just came for the food. Regardless of the initial reason you came, there are so many reasons to stay. Pacific Beach is such a unique and fun place be at any time of the year. Most of you probably did your research or asked the concierge at your hotel about the local attractions, places to go and things to do. But did you ask them about people to see? Probably not. If you haven’t heard about one of the most famous people in Pacific Beach then I am glad you opened this blog! 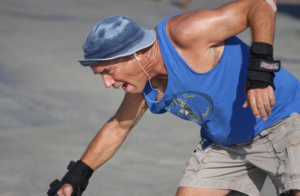 Known by the locals as “Slomo”, Dr. Jon Kitchin is someone we hope you see while in Pacific Beach. Slomo’s “claim to fame” is his daily slow motion roller skate up and down the boardwalk. About 20 years ago almost, Slomo, a very wealthy medical professional was falling into depression. He was surrounded by material things that didn’t bring him happiness. He expressed that he found joy in roller skating and chose to relocate to a house on the beach and pursued his passion. It became a spiritual transition for Slomo. Slomo has studied the neurological breakdown of slow motion skating. 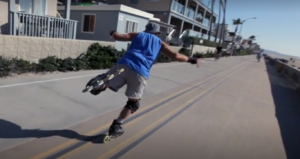 If you spend any time on the boardwalk it is very likely you will see Slomo. Everyone has a different story about why he does what he does and who he was before he became Slomo but that doesn’t stop the cheering and high-fives he gets as he passes by people. Some have thought he was homeless or had mental illnesses but he isn’t phased. Slomo has become a celebrity in Pacific Beach and will truly die a legend.

We use cookies on our website to give you the most relevant experience by remembering your preferences and repeat visits. By clicking “Accept”, you consent to the use of ALL the cookies.
Cookie settingsACCEPT
Manage consent

This website uses cookies to improve your experience while you navigate through the website. Out of these, the cookies that are categorized as necessary are stored on your browser as they are essential for the working of basic functionalities of the website. We also use third-party cookies that help us analyze and understand how you use this website. These cookies will be stored in your browser only with your consent. You also have the option to opt-out of these cookies. But opting out of some of these cookies may affect your browsing experience.
Necessary Always Enabled

Any cookies that may not be particularly necessary for the website to function and is used specifically to collect user personal data via analytics, ads, other embedded contents are termed as non-necessary cookies. It is mandatory to procure user consent prior to running these cookies on your website.